Art museums as places of informal learning engage young children and foster cultural and social inclusion through a multimodal app.

In most cases, young children go to art museums as part of (pre)school trips and they are often segregated from the gallery space into a room where they participate in creative and art workshops. Visits with parents occur in art museums, but not as often as they could or should.

The STSM Multimodal Storytelling in Museums, carried out at the Kunsthistorisches Museum in Vienna, shows how an app can engage young children, and their parents, and motivate them to learn about art and history and develop a positive image of themselves and of the museum.

Fig 1. Screen shots of the Superpower story, KHM Stories app: a) fictional characters guide the visitor (left), b) the Fabulous Warriors station about a 4BC sarcophagus (middle), c) colouring page on the app (right).

The Kunsthistorisches Museum Stories (or KHM Stories) is an app developed by the educational staff of the museum (in collaboration with a Vienna-based software company) with the intent to encourage repeated visits, primarily by the locals. It contains stories related to different museum objects on display, which are translated into German, English, Turkish and the language/s of the ex-Yugoslav ethnic groups  (Bosnian, Croatian and Serbian) presently forming the second largest minority in Vienna. Two stories – How to Look for Monsters and Superpower! – have been created for children.

A story hunt through the museum

The Superpower story, for example, contains seven stations, i.e. objects interpreted through different types of information and modes. Two characters take children through the physical museum space (Fig 1a), from one object to another and each new page on the app presents new information or activity. The guidance through the space resembles a scavenger hunt with different assignments given to children.

Pages can be skipped and different objects (or stations) selected from the main menu of the story. No matter which object is selected, the user is guided to it through the space and when reached the object and meanings either directly or indirectly related to it, can be explored through different cultural and historical contexts and in different modes (Fig 1b,c). Stories often include various ways in which objects can be linked to everyday experiences of young visitors (Fig 2a). 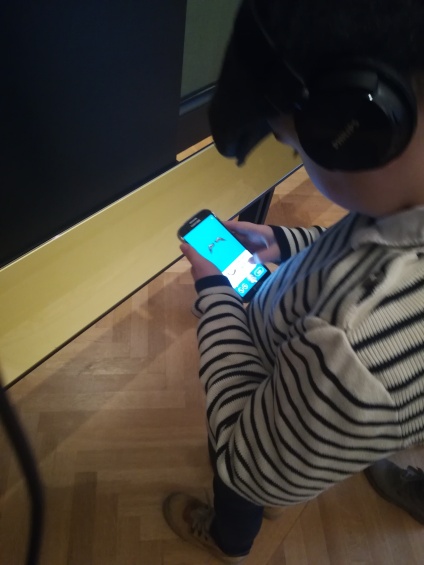 Fig 2. Page on the app that allows visitors to take a selfie (left), a research participant using the app in the museum (right)

The research conducted at the museum with young children (7 and 8-year olds) and their parents of ex-Yugoslav background through participative observation and interviews led to several important insights into their museum experiences and attitudes towards the museum. Both their ethnicity and the fact they visited the museum for the first time as a family also brought cultural and social inclusion into the focus of the research.

Children felt independent and confident during the visit

Children were mostly familiar with the app functionalities and they navigated through the content and the space (with the help of pictorial and written instruction) with confidence. They also showed better orientation skills than some adults and while interacting with their family members they felt proud in knowing facts (that they found out from the app), or choosing the right answer on a quiz. They were the ones “educating” their parents and not the other way around, especially if the parents did not use the app.

Children were in charge of their museum learning experience

Children held in their hands a rich source of information that allowed them to shuffle trough the contents in search of information that would interest them most. With intelligently developed and organised multimodal content, different modes were selected and engagement in children inspired by the possibility to choose the preferred and skip the unappealing ways of interaction with the content.

Children (and adult family members) were recognized by the museum

The third characteristic arising arose from the use of the app in a controlled and authorised space of the museum is the state of being recognised, accepted or included through a programme specially developed for this particular group of people – who could use their language and did not require knowledge about art to enjoy the visit. The satisfaction the app generated with the children was a good justification for investing time to come to the Kunsthistorisches Museum. By creating the HKM Stories the museum is seen to recognise children as individual visitors.